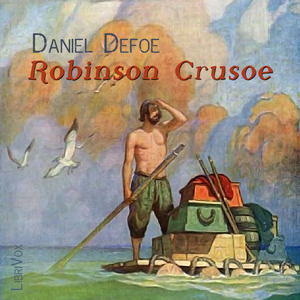 LibriVox recording of Robinson Crusoe, by Daniel Defoe. Read by Mark F. Smith. Shipwrecked and castaway, Daniel DeFoe’s hard-luck character is still the standard for “growing where you’re planted.” Captured by pirates, he makes his break in a small boat and undergoes desperate adventures before winning his way back to civilization. But Crusoe proves willing to chance his luck a second time when, after sweating his way to prosperity as a planter in Brazil, he undertakes a voyage that isn’t needful… and is marooned on a small island off South America.

Crusoe shows the value of single-minded labor as he pursues ways to feed, shelter, and clothe himself. His ardent wish is to escape his island – why is it that the only people who come there are cannibals? But he spends more than two decades in isolation before acquiring a sidekick – the man Friday you’ve probably heard of. And who would guess his way to salvation would depend on leading a last-ditch fight against a shipful of mutineers?

For other castaway stories inspired by “Robinson Crusoe”, listen to “The Swiss Family Robinson” (http://snipurl.com/swiss_family) and “The Mysterious Island” (http://snipurl.com/mysterious_island). (Summary by Mark F. Smith) For further information, including links to online text, reader information, RSS feeds, CD cover or other formats (if available), please go to the LibriVox catalog page for this recording. For more free audio books or to become a volunteer reader, visit LibriVox.org. M4B audio book (320mb)

Uploaded by librivoxbooks on June 6, 2010